The Purpose of Astrology | Monkvyasa 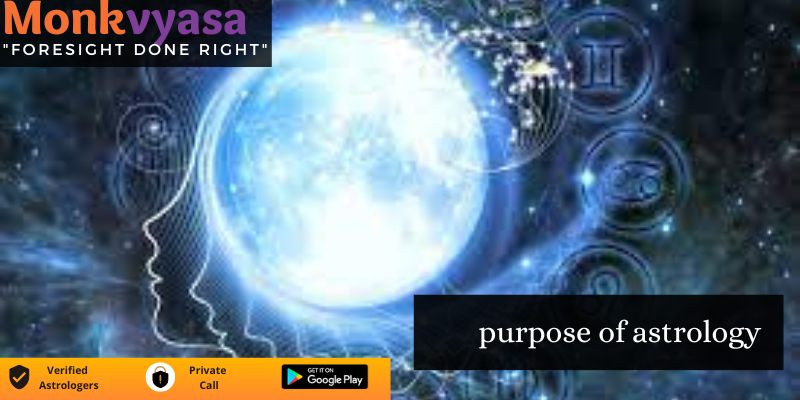 On the other hand, astrology’s initial goal was to predict a person’s future based on the positions of the planets and the zodiacal signs (the 12 astrological constellations) at the time of his or her birth or conception. The foundational methods of astrology were created from this field known as genethlialogy (casting nativities). General, catechismal, and interrogatory are the three primary branches of astrology that emerged following genealogy.

General astrology investigates the connections between social groups, nations, or all of mankind and key astronomical events (such as the vernal equinox, eclipses, or planetary conjunctions). It provides astrological explanations to queries the bru had previously been asked in Mesopotamia.

Whether or not a chosen moment is astrologically favorable for the success of a course of action started in it is determined by catarchic (pertaining to beginnings or sources) astrology. It basically goes against a strict interpretation of genealogy because it enables the person (or corporate body) to operate during astrologically favourable times and avoid any failures implied by nativity.

Based on the heavenly conditions at the time the client asks the questions, interrogatory astrology responds to the client’s inquiries. This astrological counseling service necessitates that the astrologer undergo ritual purification and preparation since it is even more removed from determinism than catarchic astrology.

Other types of astrology are variations on one or more of the aforementioned, such as iatromathematics (the application of astrology to medicine) and military astrology.

The astral omens used in Mesopotamian divination were later incorporated into what is now known as astrology in the traditional sense and formed the basis of a subfield of astrology called natural astrology. The cuneiform work Enma Anu Enlil, which is devoted to celestial omina, was began during the first dynasty of Babylon (18th to 16th centuries BC), even though lunar eclipses appear to have been viewed as foreboding at a considerably earlier period.However, this series’ ultimate compilation and codification were not finished until the start of the first millennium BC. A standard version, however, never existed, according to the tablets that have survived, the majority of which are from King Ashurbanipal’s (7th century BC) Assyrian library. Each copy featured a distinct layout and contents that were intended to make it easier for the owner to consult the omens.

The four major categories that the Enma Anu Enlil omens were divided into were named after the four main deities who were involved in the ominous communication: Sin, Shamash, Adad, and Ishtar.Omens related to the Moon’s earliest crescents, eclipses, haloes, and conjunctions with certain fixed stars can be found in Sin (the Moon); Sun-related occurrences like eclipses, the simultaneous observation of two suns, and perihelia (additional suns) are dealt with by Shamash (the Sun) as omens; Ishtar (Venus) contains omens relating to planetary phenomena such as first and last visibilities, stations (the points at which the planets appear to stand still), acronychal risings (rising of the planet in the east when the Sun sets in the west), and conjunctions with the fixed stars. Adad (the weather god) is concerned with omens relating to meteorological phenomena, such as earthquakes, thunder, lightning, and cloud formations.

Although this network of watchers was formed throughout the Assyrian kingdom in the 7th century BC, their reports frequently mention these omens, they appear to have fallen out of favour by the conclusion of the Persian era’s rule over Mesopotamia (ending in the 4th century BC). The right linkages between celestial phenomena and terrestrial events were afterwards sought out in numerous writings collectively referred to the Diaries.The Achaemenid dynasty controlled Persia from 559 to 330 BC. Prior to this evolution, however, parts of the ancient omen series were directly conveyed to Egypt, Greece, and India as a result of their dominance of these cultural areas or of their border regions.

An ancient demotic papyrus based on an original from around 500 BC provides the bulk of the evidence supporting the transfer of lunar omens to Egypt during the Achaemenid period. The remnants of a treatise written in Greek in the second century BC and allegedly addressed to a King Nechepso by the priest Petosiris point to a more comprehensive usage of Mesopotamian heavenly omens.The second book of the Apotelesmatika, or “Work on Astrology,” by Ptolemy, a Greek astronomer of the second century AD; the first book of an astronomical compendium, by Hephaestion of Thebes, a Greco-Egyptian astrologer of the fifth century AD; and the On Signs of John Lydus, a Byzantine bureaucrat of the sixth century AD, all included material from Enma AnuThe Magusaeans of Asia Minor, a group of Iranian settlers influenced by Babylonian ideals, provided another another route of transmission to the Greeks. Several Classical books on natural history, especially those of Pliny the Elder (c. AD 23–79) and the Geoponica, contain their lessons (a late collection of agricultural lore).

Numerous works on heavenly omens also exist in various Middle Eastern languages, though it is still unknown where they came from and whether they are directly related to Mesopotamian culture or came from Greek or Indian intermediates.The most significant of these writings are those that the Harranians attribute to Hermes Trismegistus and are now preserved in Arabic, the Book of the Zodiac of the Mandaeans (a Gnostic sect still active in Iraq and Khuzistan), the Apocalypse, which is attributed to the biblical prophet Daniel and is still in existence in Greek, Syriac, and Arabic versions, and The Book of the Bee in Syriac.

During the Achaemenid occupation of the Indus valley in the fifth century BC, it appears that Mesopotamian omen literature, including the material in Enma Anu Enlil, was transmitted to India. Buddhist missionaries played a significant role in bringing this information to Central Asia, China, Tibet, Japan, and Southeast Asia. The earliest indications of this knowledge may be found in Buddhist literature from this time.But the earliest iteration of the as-yet-unpublished Gargasamhita (“Compositions of Garga”), which dates to around the first century AD, is the most significant of these Indian texts and the oldest one still in existence in Sanskrit. The original Mesopotamian text was changed to conform to the Indian social structure, which included the four-caste system and the upper castes’ obligation to carry out the samskaras (sanctifying ceremonies).

The Brhatsamhita, or “Great Composition,” of Varahamihira (circa 550), the Jain Bhadrabahu-samhita, or “Composition of Bhadrabahu,” (circa 10th century), and the Parishishtas (“Supplements'') of the Atharvaveda (possibly 10th or 11th century), are the most notable later collections of omens in Sanskrit, though these add little However, there is a significant infusion of Arabic adaptations of the ancient Mesopotamian celestial omens as conveyed through Persian (Tjika) translations in the works titled Tjika from the 13th century and afterwards. In the older Sanskrit works, the omens’ links with astrology had mostly been in the areas of military and catarchic astrology; however, in Tjika, they are strongly related with general astrology.